This is a really quick and simple method you can use for motivation. It is a logical approach, and aims to rewire the way you feel about a difficult task.

Many people look at a difficult task and consider the bad elements of it, for example:
– Trying to lose weight, people will see the early morning gym sessions as a chore, and dread the low calorie diet they will have to consume.
– Setting up a business they will look at the risk involved, and the initial drop in pay from their regular job.

These types of thoughts are so common, but they are setting you up for failure.

The people who succeed take a VERY different viewpoint: They only consider the pleasure they will receive and not even think about possible negatives, so taking the above examples:
– They visualize the slim body at the end of their efforts, and how good they will feel about themselves.
– They think of the financial freedom, and their potential to make even more money in the long term.

You can see that although the above two people may want to achieve the same goal, the second person is much more likely to succeed, simply because of their beneficial frame of mind.

Next time you set a goal only think of the positives and focus on the outcome rather than the negatives or things that might be difficult.

p.s. Our subliminal motivation album will give you an extra boost in motivation, eliminate any negativity, and ensure your subconscious mind is completely focused on your goals to ensure your success. 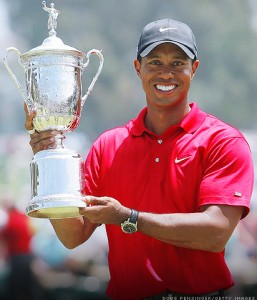 Tiger Wood’s father Earl Woods had a background of a degree in Psychology and Sociology, and also underwent military Special Forces training – he knew the power of the mind!

Earl was extremely influential in Tiger’s early life; he gave him the head-start he needed to be hugely successful in golf.

From a very young age Earl made his son watch motivational videos and coached him on how to keep his focus – even creating distractions while he was playing golf to test him!

When Tiger was only six years old he asked his father for a subliminal tape. Even at this young age Tiger knew the secret to success – that his mind must be trained to peak condition in order to become the greatest golfer in history.

He listened to the subliminal tape every day, feeding his mind a steady diet of positive affirmations. This helped him to align his mind to his goals, to focus on success, and block any negativity out of his mind.

It didn’t stop there, he also posted the affirmations to his bedroom wall. Both consciously and subconsciously he was receiving the same high quality affirmations – affirmations such as “My power is great”  “I smile at obstacles!”,” “I believe in me” “I focus and give it my all”. Before long all of these beliefs became deeply embedded in his subconscious mind. He really began to believe them, and this strong belief led him to make them a reality.

By the time he was in second grade, Tiger was known across the USA in the golfing world. Today he is regarded as the most highly skilled golfer who ever lived. However he is still humble, he has not abandoned the subliminal messages or the mind training. He also uses a lot of positive visualization – he always imagines the ball going down the hole. He pictures this and nothing else when he steps up to take a swing. No other mental images are allowed into his mind. He only focuses on success – and that is exactly what he gets!

Upon winning the Western Open in an interview with magazine USA TODAY he said “The biggest thing is to have the mind-set and the belief you can win every tournament going in”.

We have developed a unique subliminal golf program, the messages on our album are not for general success, but SPECIFICALLY designed to improve your golf skills, and focus.

If you have been taking anger management classes then anger management subliminal messages may be an excellent tool to use in addition to help control your anger. While you will not want to rely solely on subliminal messages to help you control your anger, you can easily add them to your tools to help to become more relaxed, and more resistant to anger.

Anger management classes are a must for anyone who has experienced sudden outbursts of anger, or who has become enraged at small, insignificant details that are normally overlooked. You may have already caused your friends and family to avoid you, or even been fired from a job because of your inability to control your anger.

Listening To Your Inner Voice

Whether you realize it or not, anger is often a reaction to an inability to control the things around you or the presence of negative thought patterns in your subconscious mind. When you use subliminal messages to change the way you look at the world, you will begin to see the world without the nagging negativity causing ager in your daily life.

As you become more and more positive, you will begin to see the anger fade away. Although you will still need to seek traditional treatment, subliminal messages can help you make uncontrollable anger a thing of the past.

Is it really possible to learn Spanish, or any other language subliminally?

A learn Spanish Subliminal CD acts simply as a learning aid, which means that while it will not help you learn the language on its own, it will enhance the rate at which you are learning, and processing the language.

You will still need to take classes or study Spanish in some way, but it will align your mind so that you can absorb the information easier.

There really is no MAGIC PILL, even when subliminal messages are involved – they simply align your unconscious mind with your conscious thoughts so that you have a better chance of achieving your goal, and learning spanish subliminally is no different. It will help your memory, retention, pronunciation, and your reading, writing, and speaking skills – but the key word is HELP – you still have to study too.

We have had a lot of comments from people saying our language albums have improved their retention rate, their focus while studying, their understanding, and even their enjoyment of learning. Try our subliminal spanish album here.

What!? Negative thoughts!? “This is INSANE!” I hear you say.
Wait wait wait, just hear me out 🙂

We strongly believe in the power of positive thoughts – to only think of the positive, and always focus on your goals, always focus on the end result you want rather than getting bogged down with the day to day tasks etc.

However sometimes negativity is hard to avoid, and if you are not careful it can be very powerful and override the positive thinking you were doing – it is a very strong emotion.

However, you can use the power of negativity to your advantage! Next time you are feeling mixed emotions about a tough task and need to get motivated try this:

Write down the pleasure you associate with the task, but also the PAIN you would experience if you did not do it.

The idea here is to fire up your emotions, to drive you to take action. We are all motivated easier by the fear of loss, than the prospect of gain. So if you are about to skip on the gym think of the belly and the fat you will put on if you do not act. If you see an attractive woman, then imagine the pleasure of being with her, but also the lousy feeling of not daring to go and talk to her.

This technique will give you a temporary boost of more than DOUBLE the amount of logically seeing the benefit of doing the task!